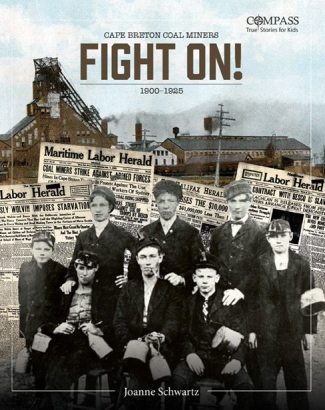 In early twentieth-century Cape Breton, coal mines stretched far out under the ocean. The workers, mostly men, but also children and ponies, spent all day in the dark, damp mines. Each day the workers descended into the mines, they risked never seeing sunlight or their families again. They were miserable and fearful, working in dangerous conditions where fatal accidents were common.

So the brave miners took matters into their own hands, and stood up to the companies treating them this way. They went on strike again and again, suffering from starvation, disease, freezing winters, and violence at the hands of the mine owners and police. Fight On! tells the stories of these miners and their families, Cape Breton heroes who fought against corporate greed, putting their livelihoods on the line for better conditions and healthier families and communities.

The newest installment in the award-winning Compass series, Fight On! is at once an engaging history and a passionate call to action against injustice. Includes dozens of modern and archival colour photos and illustrations, a glossary of terms, index, and informative sidebars.

Joanne Schwartz is a highly regarded writer for children and a children’s librarian. In this true story for kids, she pulls no punches in her exploration of the exploitation and maltreatment of working people in the early twentieth century. As Canada and Canadians come to learn about injustices committed in the past against Indigenous people, ethnic and religious minorities, women, and sexual minorities, it is important to recall that economic injustice and exploitation of the working class is another part of history that should not be forgotten. Fight On! is a needed contribution to Canadian labour history, exploring the particular instance of coal miners in Cape Breton and their struggles to gain and maintain safer working conditions and something resembling a living wage.
Highly Recommended.
–CM:Canadian Review of Materials

There’s a very nice little book out about the coal miners’ (and steel workers) fight against greedy and heartless corporations in early twentieth century Cape Breton… Schwartz, who has deep Cape Breton roots, describes the hard and dangerous lives of the miners, including young boys whose job it was to open trapdoors and who spent long days underground in complete darkness, alone, “with only rats for company.”…It’s richly illustrated with photos, the chapters are short and to the point, and the anecdotes are telling. There’s a moving section about the lives of the pit ponies, always in the dark, always underground….As the title indicates, there’s no doubt where the writer’s sympathies lie, and no effort to promote both-sidedness in the face of such immense corporate greed and cruelty. …It’s Davis Day today. No better day to rush out to your independent bookstore and buy this wonderful book for your favourite niece or nephew.